You are on the official website of ConcertAction Femmes Estrie.

“The history of CAFE is the history of feminism in the Estrie region. It is, in a word, the common history of these member organisations and the story of a regional solidarity.”

In the wake of the many activities surrounding the International Women’s Year in 1975, feminism began to organize in the Estrie region with the emergence and consolidation of the following groups:

Based on these observations and supported by local feminist protagonists at the time, Nicole Dorin established La Table de concertation des groupes de femmes en Estrie (roundtable of women’s groups in the Estrie area). Since 1998, this roundtable has been known as ConcertAction Femmes Estrie.

Photo caption: March in Stanstead featured in the October 18, 2000 edition of Stanstead’s newspaper “The Journal” as part of the World March of Women. We can see close to 800 women, many of which from the four high schools in Stanstead. 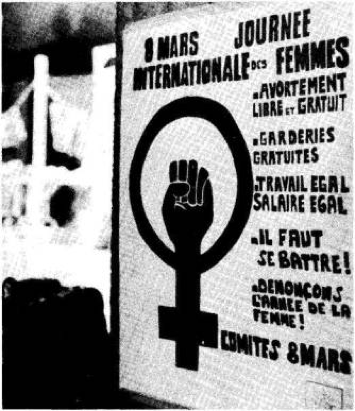 From that moment on, Nicole Dorin and the women’s groups undertook the lengthy process of ensuring access to the various sources of funding. Centraide figured among those first sources of financing. Thanks to the first regional socio-economic forum organized by the Conseil régional de développement (CRD) de l’Estrie (regional developmental council of the Estrie region), the following three women’s groups were able to access vital core funding:

At the same time, work had begun on the provincial and federal level to recognize women’s groups as an indispensable resource for women to ensure their safety, training, care, and access to justice and employment.

Thanks to their training and frontline experience, women in women’s groups have gained a better understanding of the problems faced by women and have developed specific approaches. They’ve learned to form partnerships with organizations and decision-makers in various sectors. Their actions promoted the knowledge and recognition of women and the services offered by women’s centres.

Over the years, women’s groups that are members of the regional roundtable have continuously felt the need to harmonize their goals and the working of their regional roundtable to new realities. In that respect, in 1992, and again in 1998, members revised the how the roundtable works and its goals. ConcertAction Femmes Estrie (CAFE) continues to be an evolving platform serving women and women’s groups in the region. The regional organizations of the Bread and Roses March of 1995, the March of Women Against Poverty and Violence 2000, 2005, 2010, and 2015, ensured greater visibility, solidarity, and organization. Encouraged by this wave of solidarity, ConcertAction Femmes Estrie (CAFE) produced a special supplement in February 2008 on feminism in the newspaper La Tribune: “Féministes : agentes de changement” (Feminists: agents of change). This supplement generated a debate and put back on the agenda the question of feminism in the Estrie region.

In addition to the solidarity between women’s groups, ConcertAction Femmes Estrie (CAFE) has established over the past few years, a solidarity with other groups in the Estrie region to ensure that government policies lead to a genuine effort to fight poverty. ConcertAction Femmes Estrie (CAFE) promotes a gender-based analysis with an intersectional perspective (ADS+). This analysis makes it possible to demand coherent policies and funding for social programs that respect the needs of the diversity of women.